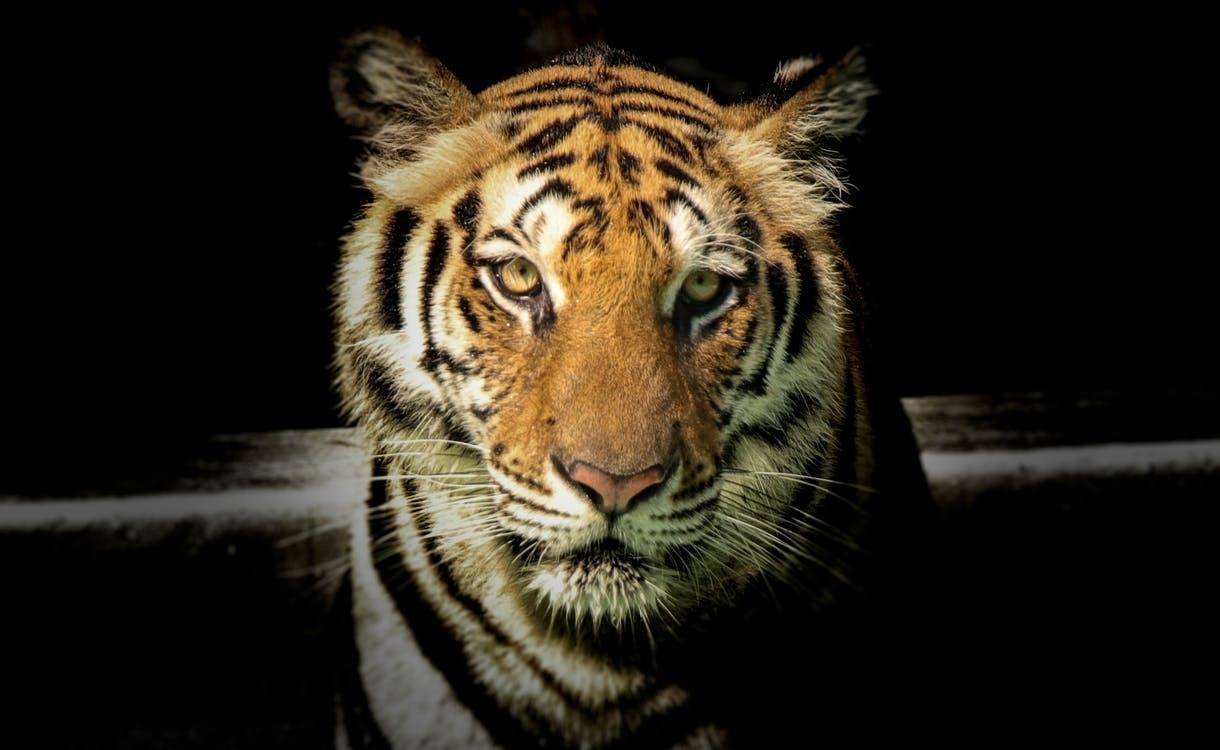 Regardless of your answer, if what you’re after is a tour of the turnaround, restructuring, and insolvency industry (the “Industry”), you came to the right place.

A Little History About Law & Economics

The Industry began to take its current form shortly after the Bankruptcy Code became law in 1978. The main reason for this was money.

Before 1978, it was common for bankruptcy judges to disallow portions of fees earned by bankruptcy professionals on the basis that the debtor, being in bankruptcy, couldn’t afford to pay big fees. Seriously, fees could be denied on this basis alone even if the work was judged to be reasonable, necessary, and excellent.

This had a deleterious effect with respect to attracting professionals to the Industry. One of the fundamental innovations of the Bankruptcy Code, therefore, was § 330, which governs the current lens through which a bankruptcy judge must review professionals’ applications for fees. Among other things, § 330 makes clear that professionals engaged in bankruptcy cases are entitled to payment at the same rates as they would charge in non-bankruptcy matters.

It’s no coincidence that AlixPartners was founded in 1981, three of the major Industry associations were founded in 1982, or that Alvarez & Marsal and Pachulski Stang Ziehl & Jones were both founded in 1983.

It Takes a Village

A company filing chapter 11 requires the assistance of an attorney because, unlike natural persons, corporations and limited liability companies can only appear in court through counsel. Many companies file and go through chapter 11, however, without involving any other corporate restructuring professionals. This used to be more common than it is today.

Over time, the needs of chapter 11 debtors—and other distressed companies—have become more sophisticated and complex. One result is that many financial advisors, investment bankers, valuation experts, auctioneers, lenders, and a host of other professionals now dedicate their professional lives to providing restructuring and turnaround services, and are an important part of the Industry.

Taking a step back, every financially distressed company (as discussed in our last installment) of course has creditors, equity holders, and other parties who care about and seek to influence how the distressed company attempts to restructure or otherwise deal with its obligations. It is not uncommon, therefore, to see multiple parties retaining their own counsel, financial advisor, investment banker, or other professionals. This graphic of a hypothetical chapter 11 debtor and its key constituents may help paint a clearer picture: 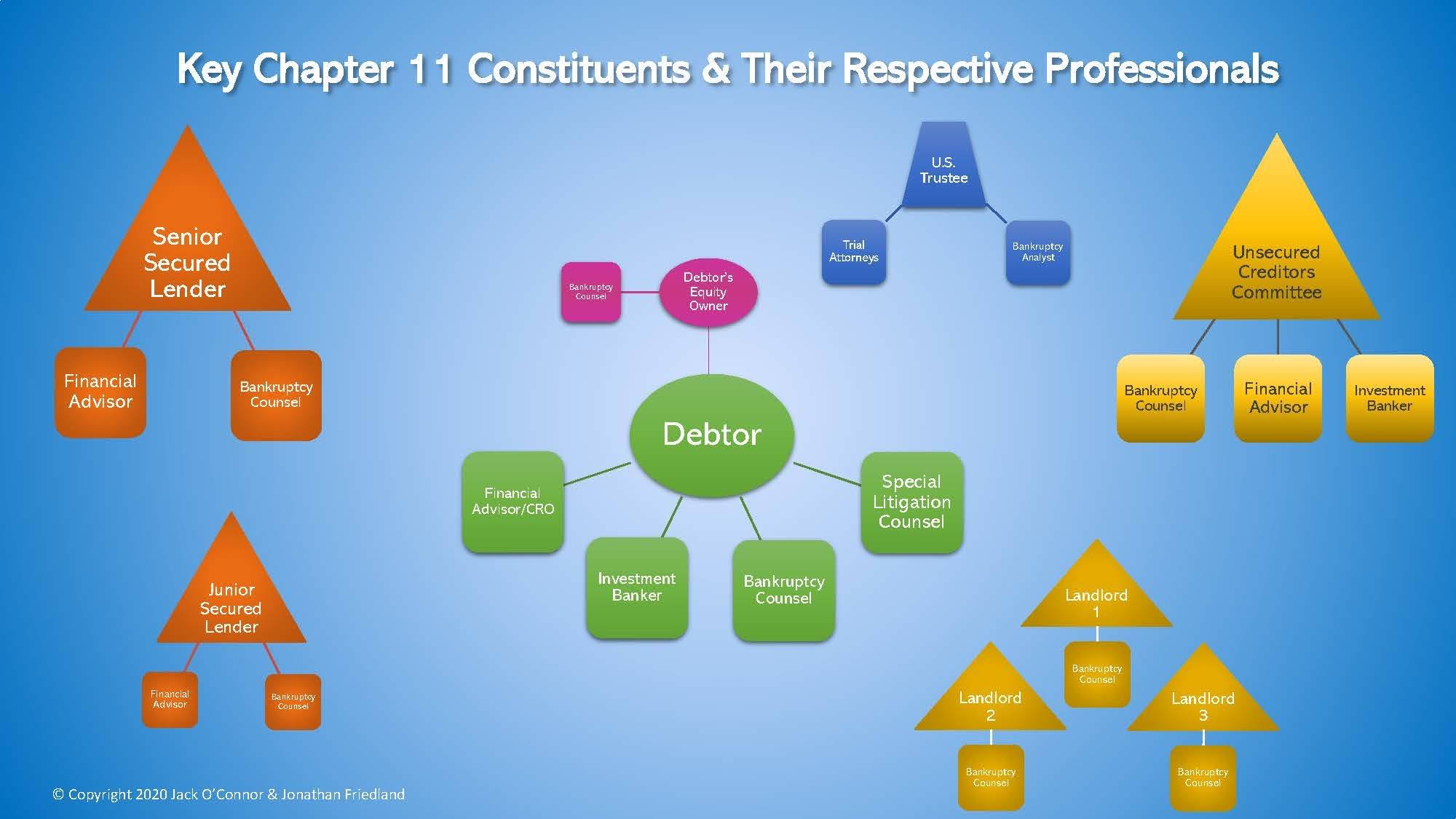 Like any industry, the corporate restructuring Industry has its trade associations. If you’re reading this because you are a potential client of someone in the Industry, you can safely skip this last bit (after all, you don’t need to be a member of the National Dairy Counsel to buy a quart of milk). But if you’re an aspiring or brand-new member to the Industry, then you should at least be aware of the following organizations:

ABI, founded in 1982, is the largest association of bankruptcy professionals in the United States. The ABI has about 12,000 members in multi-disciplinary roles (the largest percentage of which are attorneys) and puts on many conferences each year. ABI is a particularly good resource for scholarship and learning within the Industry. ABI also conducts numerous empirical studies regarding bankruptcies in the US, and frequently provides testimony to Congress regarding bankruptcy issues.

AIRA (previously known as the NAAI (National Association of Accountants in Insolvency) and later AIA (Association of Insolvency Accountants)) was formed in 1982. Its mission is to unite and support professionals in the Industry. AIRA’ members tend to be financial advisory professionals, which is reflected by its certification programs: CIRA (Certified Insolvency & Restructuring Advisor) and CDBV (Certification in Distressed Business Valuation).

INSOL is a global federation of various national associations of accountants and lawyers who work in the Industry. INSOL has more than 44 member associations and more than 10,500 individual members. INSOL also has ancillary groups that represent the judiciary, regulators, lenders, and academics. INSOL’s focus is maximizing economic value at the global level by improving solutions to cross-border insolvencies and connecting Industry professionals across the globe.

NABT was formed in 1982, and refers to itself as “[t]he voice of the Chapter 7 Bankruptcy Trustee community, serving its interests and needs through education, communication and promotion of the profession.” Membership in NABT is primarily for chapter 7 trustees and their staff, judges, and employees of the U.S. Trustee’s office. Associated Industry professionals and businesses are also participants in NABT as associate members.

NCBJ is an association of the Bankruptcy Judges of the United States which has several stated purposes, including: providing continuing legal education to judges, lawyers, and other professionals; promoting quality and uniformity in the administration of the bankruptcy system; and improving the practice of law in the bankruptcy courts of the United States. NCBJ hosts an annual conference that is perhaps the best-attended event in the Industry.

TMA was established in 1988. It has about 10,000 members and is organized into more than 50 local chapters across the world, and most of the activities the TMA sponsors are done at the chapter level. The percentage of attorneys who make up membership is less than in the ABI. TMA is probably the most diverse of the Industry associations in terms of what its members do for a living.

NYIC was formed in 1918 as the New York chapter of the National Institute of Credit, becoming its own standalone organization in 1957. NYIC does not limit its membership to players in the distressed and turnaround Industry. Rather, its membership includes many alternative lenders and credit professionals. NYIC, likewise, serves to educate such professionals and to help foster relationships among credit executives, accountants, and attorneys.

SFNet, formerly known as the “CFA” or Commercial Finance Association, was founded in 1944, like NYIC, is not geared specifically to the Industry. Rather, it is for professionals in the secured lending space generally.

Understanding all this stuff in the context of bankruptcy is important, but not every distressed company winds up in bankruptcy. So, you also need to understand how it works outside of bankruptcy. Read Installment 4 to read the rest of the story.

When a Seller of Real Property Files for Bankruptcy Before Closing December 19, 2022
Strategic Filing: Chapter 11 Bankruptcy for Litigation Advantage? December 14, 2022
The “A&P” Chapter 22 Bankruptcy Saga: A Canary in the Coal Mine August 8, 2022
Advertisements